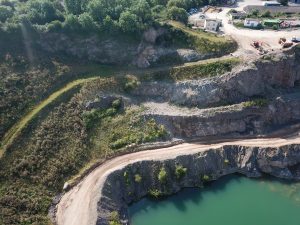 Earlier this month MJ Church completed the acquisition of Wick Quarry, the company has operated at the Quarry for three years under licence. Now with the acquisition confirmed the company is able to move forward with growth plans with greater certainty on both the availability of tipping facilities and the ability to meet the internal demand for high quality aggregates across the region. 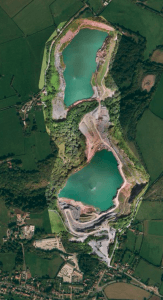 Wick Quarry is located next to the Wick Golden Valley between Bristol and Bath. The valley has a rich industrial history – from 1892 it was the site of the Wick Golden Valley Ochre and Oxide Works, with ochre extracted from shallow pits and underground mines in the surrounding area. Wick Ochre was used to colour The Mall outside Buckingham Palace and exported around the world for use as a pigment in pottery, paper, paints and other products. With the depletion of ochre supplies the site closed in the 1970s and in 2001 the rehabilitation of the site started. In recent years the quarry has been converted into a nature reserve with some major successes, peregrine falcons come back year after year to rear their young, and many species of plants have been re-established helping to attract a variety of fauna.

However, the quarry has attracted a good deal of anti-social behaviour putting the lives of those entering the quarry in severe danger. To solve this problem the quarry, through a change in its planning approval, is now able to substantially change the landscape by reducing cliff faces, reducing the sides of the current lakes to gentler slopes and reducing areas of instability make the entire area a much safer environment. To achieve the changes some 3.8 million cubic meters of material is required.

On a day to day basis Phil Wheeler will now manage the quarry, and will be based on site for most of the time.