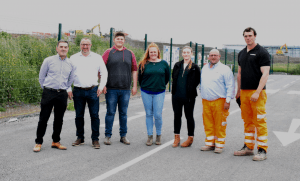 One of MJ Church’s major projects is the construction of reinforced embankments for slip roads and a gyratory for a new junction on the M49 in Avonmouth. MJ Church is subcontracted to Galliford Try who are working on behalf of Highways England to build this much needed junction to alleviate traffic congestion in the area as new distribution facilities come online.

MJ Church is importing and laying some 400,000 tonnes of imported recycled and quarried material. With a 70 strong team on site the project has been steadily progressing since early summer 2018. A major milestone for the entire project was reached as the bridge deck beams were craned into place last weekend; MJ Church will continue to be on site till early Autumn this year.

Many of the team have been on the project since it started last year, for some it has been a great opportunity to step up into bigger and more responsible roles within the Operations Team; Phil Bell Section Supervisor being one, read about his journey below. Erin Wooster Trainee Civil Engineer, Lauren Newbury Trainee Quantity Surveyor, both on their first major civil engineering project have been well supported by Jon Mousah Project Manager, Nick Cooksley Contracts Manager, Graham Bean Works Manager and Dominic Hewitt Engineering Surveyor – see photo.

Contract workers have also become an established part of the M49 team with Gemma Borley as Site Agent, Dave Warren and Peter Bosompem as Quantity Surveyors all based on site.

The team on the M49 have been presented with Safety Awards from main contractor Galliford Try:

In April the team working on Zone 3 of the new embankment received the Gold Hat Award for safety, quality and general good practices shown by the team; Supervisor Phil Bugler was presented with the award by Graham Prothero of Galliford Try.

In June Seamus (James) McIntrye was presented with a Safety Contribution Award from Galliford Try for raising and resolving a safety observation. Seamus instigated a policy for stopping the stone wagons as they were leaving site to check there was no material trapped between their tyres which could have been taken onto the M49 motorway damaging the road surface. 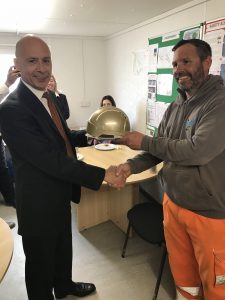 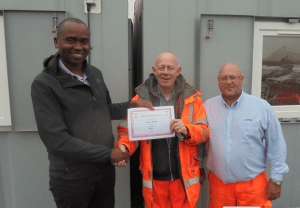 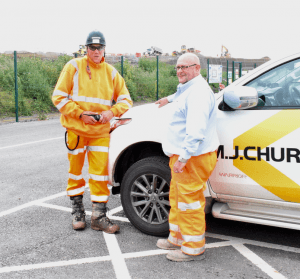 Recently promoted Section Supervisor Phil Bell has also found the M49 to be an excellent learning opportunity to progress his career in site management. Phil joined MJ Church 13 years ago as a young labourer. Having worked through various roles on sites, including groundworker and drainage ganger, Phil met Graham Bean, on another MJ Church project, who was keen to support him in developing his skills and enable him to take on more supervisory roles on site.

With additional support and guidance from General Foreman, Seamus McIntyre, and under the watchful eye of Jon Mousah, Phil is now one of three Section Supervisors on the project. The promotion was confirmed after Phil passed his SSSTS (Site Supervisory Safety Training Scheme) qualification.

Phil commented, “I’m really thankful to everyone at MJ Church who has given me the opportunity to progress, from Mike and Julian in the early days, to Graham, Jon and Seamus now. I’ve also got a great team I’m working with on the M49 – we’re currently putting in the load distribution platforms and installing the ‘terramesh’ baskets that form the embankments. It will be a project that I can drive through in years to come and know I was part of the great team that built it!”. Phil pictured with Graham Bean. 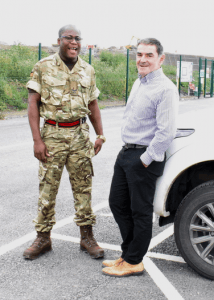 This week MJ Church showed its support for the Armed Services as Reservist and ex-regular from the 165 Port Regiment, Royal Logistics Corp, Lance Corporal Peter Bosompem, worked in his military uniform as part of the annual Armed Forces Week.

Reservists, cadet instructors and cadets aim to raise awareness of both the part-time and regular services and promote recruitment by ‘wearing their uniform to work’, a campaign that has successfully been running for a number of years. Peter pictured with Nick Cooksley.