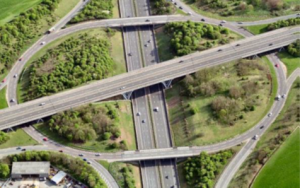 Junction 11 of the M5 motorway, known as Golden Valley, is a major interchange serving both the north of Gloucester and Cheltenham.  It is comprised of two bridges as part of the gyratory system that links the M5 to the A40, plus a central bridge that carries the A40 itself.

Construction was completed in 1971.

The bridges are all post-tensioned (PT), with steel ropes (tendons) running the length of the deck inside ducts cast into the concrete slab.  These tendons are held in place at each end by anchors encased in a cage of steel reinforcement, and ensure that the slab is able to withstand the various forces that are placed upon it during its working life.  Once the tendons are properly tensioned, the ducts are filled with grout to prevent moisture ingress and subsequent rusting.

The deck itself is supported at each end on flexible bearings mounted onto a concrete abutment and along its span by two piers, one either side of the motorway.  These piers were subject to a separate repair regime in 2017 where deteriorating concrete was cut out and replaced.

The gyratory bridges had deteriorated over time, leading to several major defects:  Concrete had spalled and fallen away from the bridge abutments and the soffit of the decks, potentially putting the integrity of the tendon anchors in jeopardy.  Further concrete degradation had occurred to the parapet upstand, leading to the danger of the parapet railings failing in collision with a vehicle.  The bridge bearings, deck waterproofing and expansion joints all needed to be replaced.  Finally, there were fears that the PT system had not been fully grouted during the original build (a common fault being found on similar structures), and that the surface of the deck would also have to be repaired.  The full extent of these elements would only be known once investigation works were carried out.

Works began late September 2020.  The bridge decks were planed off and the waterproofing removed to expose and inspect the decks.  As suspected, these were in a bad state and a full sampling and testing suite was carried out to determine the root causes of the concrete deterioration. At the same time the cariageway at all four deck ends were excavated behind the ballast walls.

Scaffolding was erected at the deck ends to provide access and contain demolition debris.  Next the ballast walls were removed using hydro-demolition to expose the deck ends and allow for investigation of the PT anchors and the surrounding

concrete to ensure that they were not in any way compromised.

Having established that the anchors were in a serviceable condition, the next stage was to replace the concrete around them over a number of phases, carefully positioned to maintain sufficient anchorage so that the tension in the PT system was not compromised.

anchor.  The existing concrete was removed by hydrodem and replaced with a high-strength, quick curing resin-based repair concrete.

Full compressive strength was required before moving on to the next phase.

In addition to the PT works at the deck ends, the tendon ducts were located and exposed at several locations on the two decks to verify if grout was present.  As suspected, a good number of them did not have any grout, though the tendons were still in good condition, with only mild surface rusting evidence. Grout was pressure injected into all the ducts that required it to safeguard against future issues.

The parapet upstand remedials required a scaffold that would fully encapsulate the works area, prevent debris and water getting on the M5 carriageway below and have sufficient capacity to carry the weight of gang of up to eight men

along with their equipment and materials.  The scaffold could not be anchored to the bridge deck, because of the danger of drilling into and damaging the PT tendons, so we used a free-standing, cantilever scaffold counter-weighted with concrete blocks.  Compromises had to be reached between keeping the total loading of the scaffold within the capacity of the bridge deck and having a sufficient

safe working load on the platform to allow operatives to work on it.

In order to ensure that the weight limits were not exceeded, operations such as hydro-demolition and shuttering works had to be tightly controlled.  Demolition waste was removed at regular intervals, materials were brought in via the deck wherever possible, and a permit system limited the number of people allowed on the scaffold at any one time.  The scaffold was boarded out, wrapped in protective netting and the floor was lined with roofing felt, sealed to side of the bridge to collect and control water.  Hydro-demolition waste water is highly alkaline, due to the high concentration of concrete particles.  These need to be removed and the pH of the water reset close to neutral so that the water can be discharged into the drainage network. 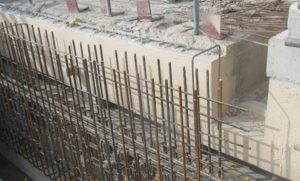 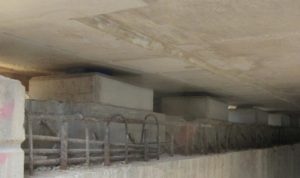 This was the first time hydro-demolition had been attempted over a live carriageway in the South West region, possibly the whole of the UK.

Modern requirements for parapet installation meant that replacing a concrete upstand built in the 1970s with a like-for-like replacement was not possible.

In order to meet today’s standards of traffic containment, the cross-sectional area of the upstand was increased and additional steel reinforcing introduced, including a new set of tie-beams that spanned the verge to act against rotational loadings from a vehicle collision.  These were introduced wherever the bolts for the new parapet railings were positioned.

A new aluminium parapet was installed.  This is much lighter than the steel railing previously used, and requires far less maintenance as painting is not required to protect against corrosion.  Once the new parapet was complete, the scaffolding could be removed which allowed the deck repairs to commence.

The surfaces of both decks were in a very bad state of repair; more so than had been anticipated at design stage.  Extensive remedial works were required, including drilling several

thousand fifty-millimetre diameter holes in order to install anodes into the slab.  These are designed to stop the process of oxidization of the rebar (rusting) where this had already started.  Again because of the risk to damaging the PT ducts and tendons, these had to be carefully positioned and drilled.  As part of these works, a monitoring system was installed in both the decks which will enable National Highways to ensure that the new system is working properly.

Once installation of the anodes was complete, areas of weakened concrete were removed and re-cast, giving the rebar additional cover to meet modern standards, hence the raised profile of the repair areas.

The ballast walls and abutments were fully reinstated and a waterproofing system was applied to all repaired areas.  The excavations were backfilled, the carriageway reconstructed and the decks re-surfaced.  The civil works were completed on 28th February, in line with the programme planned completion date.

PT investigation works, concrete repairs, bearing replacement and deck remedials were undertaken by Freyssinet Ltd, Aquaforce Ltd and Coral Formwork.  The design and installation of the scaffolding and containment was carried out by TRS Ltd.  Other main contributors include Mabey Hire who supplied the contract with temporary bridges to maintain access onto the decks, and various CWF contractors including Barrier Services Ltd, Volker Laser, FM Conway and Chevron TM.

abutments and bearings have been renewed. The end result is that two structures that were in significant danger of becoming unfit for purpose have now been refurbished and modernized, and given a life expectancy of at least another thirty years.