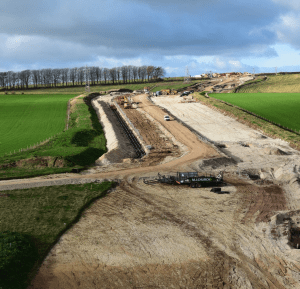 M J Church are now well under way with one of our major projects at Dorset VIP.  Under the watchful eye of senior project manager, Daniel Baker, and a permanent workforce of 55 members on site it is fair to say the job is positively progressing with great success.  So we thought a little update was due.

A recap on the job under going across the countryside of Dorset, above the village of Martinstown stands the Hardy Monument which draws many visitors for its far-reaching views across the Dorset Area of Outstanding Natural Beauty (AONB) to Portland and the sea. National Grid, as part of a national programme, have undertaken to reduce the visual impact of its Pylons and overhead lines on this view by replacing them with buried underground cables.

The Dorset Visual Impact Provision Project, (VIP), M J Church are working for Morgan Sindall Infrastructure on behalf of their client National Grid.  Over the course of a 2 year project, The Dorset VIP will see a total 90km of cables over 4 trenches being buried in the undulating and in some cases very challenging countryside. 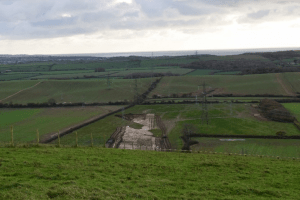 M J Church are about to reach the end of the 9km haul road infrastructure.  This haul road has been laid to allow access to the entire site and the 4 trenches will be placed either side of the road.  The road and on site compound areas alone have consumed over 110,000 tonnes of local stone. 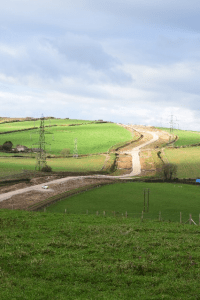 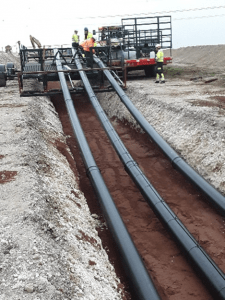 M J Church have completed 12,000m of trenching split across 4 trenches and laid 48,000m of duct so far.  The ducting was laid with a specialist trailer designed and built in house, the trailer reduces the need for staff to enter the trench and keep the assembly of ducts clean and of good quality, focusing on safety and efficiency. 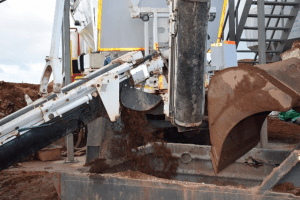 Each trench is being backfilled with CBS which has been mixed at the onsite batching plant.  MJ Church built the batching plant on site to reduce the number of vehicles passing through the village by roughly 1700.  Sand is delivered on 28t artic trailers rather than CBS being delivered pre mixed in 18 tonne 8 wheel tippers.

So far we have imported circa 88,000 tonnes of sand and we are 35% of the way through of the trench dig and duct laying. 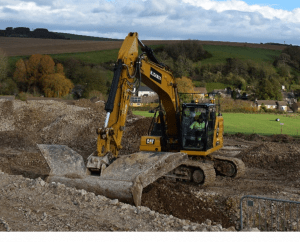 MJ Church designed a specialist bucket to go on to the machines digging the trenches, called a ‘Wing Bucket’.  The wing bucket digs the trench excavation, satisfies temporary works (shoring) and provides a safe working environment in one operation.  This along with the GPS control on the machines; reduces the requirement for Engineers in the field, provides instant remote reporting on line, level, volumes etc, and gives an accurate as built record, again focusing as a company on safety and efficiency.

Morgan Sindall have now started to winch the cables through the ducting working with gigantic drums of cabling weighing 45 tonnes a piece.

M J Church will start the Reinstatement of the fields in March 2021.

Throughout the job M J Church have been working closely with archaeologists, who have found many interesting artefacts, including several Paleolithic and Neolithic dwellings, cremation pits and countless flint tools so far.  More on this to follow as the job unfolds.

The success of Dorset VIP is very much a demonstration of how MJ Church Management, Engineering, Plant, Transport and Workshops come together to tackle a technically and logistically challenging project in innovative and agile ways. From improving safety by investment in state of the art technology and plant to improving the Carbon Footprint of the project by reducing vehicle movements, we have shown what we can do.

Despite the difficulties 2020 has thrown at us, the site team has worked tirelessly to overcome obstacles and produce a quality product that is ‘right first time’, recently demonstrated by the first 6km of cable installed through our ducts without a problem!

With big challenges still to come, I would like to thank everyone for their efforts and look forward to a successful completion of the project in 2022.

A special thank you to all involved but a particular mention to the management team as below, all of whom have played a role in honing the process.