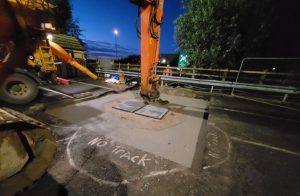 The Small Contract’s Team at M J Church would like to congratulate Phil Bell on a successful first contract as ‘Working Supervisor’.

Phil is one of the many rising stars that work with us.  He started at M J Church straight from school in 2006 as a labourer, over the years he has progressed through various roles including Dump Truck Driver, Plant Operator and now Working Supervisor.   During this time he has also achieved numerous Industry recognised Qualifications including CITB SSSTS, CPCS CSCS NVQ Level 2 in General Construction, SWQR Streetworks, Network Rail PTS Sentinel & First Aid at Work.

Phil independently supervised a small team on the contract based at The Great Bear Distribution Centre in Melksham in November 2020.

The contract consisted of removing and replacing a pump chamber that had raised out of the ground due to the pressure of the water table pushing the chamber upwards.

Once the old chamber was removed, the team proceeded to add concrete blocks around the manhole, equaling 7 tons to hold the manhole in place against the pressure of the water.  Cast iron pipes were removed and replaced with modern alternatives, then a process of concrete and various works were carried out to complete the contract.  The job required 80 tons of concrete in total.

The works were successfully completed within the programmed time.

Thank you to Phil and the Team for a successful project!